The company was founded by award-winning filmmaker Robert Joseph Butler and producer Aaron Karns. The ultimate goal of Nu Wave Films is to create various cinematic features and shorts that appeal to the art house / independent enthusiast. 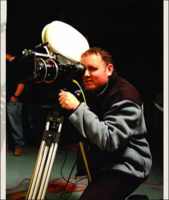 Robert Joseph Butler has made his impact immediately felt on the Michigan film landscape. In two short years, he has gone from the best-directing award at the Motion Picture Institute of Michigan to making professional short films that have been exhibited at festivals around the world.

In 2011 his short film "The Spirit of Isabel" won numerous awards on the film festival circuit, the short film adaptation of Edgar Allen Poe's "Tell-Tale Heart", in 2010 his short film "The Spirit of Isabel" went onto to play in well over 45 film festivals worldwide and won well over 15 awards, including the top prize at the 2010 Blue Water Film Festival, Best Drama at the Detroit-Windsor International Film Festival, and the Silver Platinum Award at the 44th Annual Houston International Film Festival, a festival whose alumni include Steven Spielberg, Martin Scorsese, and George Lucas. The film also had major screenings in Hollywood and New York City. "The Spirit of Isabel" along with his other award-winning short films such as "Olivia's Cross," "Within," and "The Girl on the Mat" were also aired on SHORTS TV

Robert Joseph Butler was noted and praised in the local filmmaker category when Real Detroit Weekly selected him best local filmmaker and was featured as Michigan Artist of the Month in March 2011 by 101.9 WDET. With his tremendous vision and passion, Robert 's debut feature film "Blood Immortal" won numerous awards on the film festival circuit, including Best Horror Feature at the 25th Annual Indie Gathering and Best Narrative Feature at the 2019 Royal Starr Film Festival. "Blood Immortal" was sold to ITN Distribution and the DVD was sold in major retail stores across the nation. "Blood Immortal" is currently available on Tubi TV and Fandango Now to stream. Robert Butler has successfully directed short films, gained critical support for his debut feature, and most importantly has found platforms for his body of work.

The Girl on the Mat (Film aired on Shorts TV, won numerous awards on the film festival circuit including Best Screenplay--Queens World Film Festival) Click here to view the trailer /  Click here to watch the Movie